September 16, 2017—Jimmy Shane and Andrew Tate are locked in a tight battle for the national championship after winning their respective heats Saturday at HomeStreet Bank San Diego Bayfair and the championship will be decided Sunday on Mission Bay. 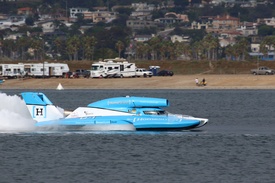 Tate won the first heat in his Realtrac/Delta hydroplane, pushing defending national champ Jimmy Shane and his HomeStreet Bank team to get a much-needed victory in the second heat. Shane delivered in the second heat by outrunning Tate to keep his 299-point lead going into Sunday’s two heats and the Bill Muncey Cup Final presented by HomeStreet Bank.

“Those two points are making all the difference in the world right now,” Tate said. “We have two heats and a final tomorrow so we have to bring everything we’ve got.”

Shane said it was important to win the second heat to have a slight cushion going into Sunday’s racing action.

“We really wanted to get the points back we lost in the first heat to Andrew (Tate),” Shane said. “Every heat matters and we had to put ourselves in a position to at least get inside of Andrew and gain the points back.”

In Heat 1, Tate averaged 154.739 mph around the 2.5-mile Bill Muncey course to take the victory. Shane finished second with a 154.38 mph lap speed and Tom Thompson in Reliable Diamond/J&D was third. Fourth place went to Dustin Echols in the Snuskitush Enterprises and J. Michael Kelly Graham Trucking boat was disqualified with a fuel violation.

In Heat 2, it was Shane with a 153.287 mph lap speed for first place, followed by Tate, Kelly, Thompson and Echols.

The H1 Unlimited season wraps up Sunday when the Bill Muncey Cup presented by HomeStreet Bank is run at 4:30 pm. 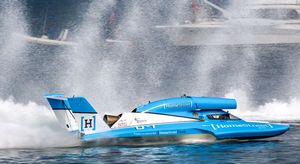 More than 75,000 spectators and RVers are expected to attend the three-day event on East Vacation Island and Fiesta Island to watch the world’s fastest boats and celebrate the end of summer.

For more than 50 years, Bayfair has brought families and friends together on beautiful Mission Bay,” said Bob Davies, race director San Diego Bayfair. “Bayfair brings competitors from around the United States and fans from across the globe for a thrilling weekend of racing.”

Bayfair features three days of nonstop boat racing, a kids’ zone and beer gardens to enjoy the festivities on Mission Bay. More than 700 RV spots will take over Mission Bay Park, a rare opportunity to stay overnight in the park.

The main draw once again is H1 Unlimited as the tour wraps up its season in San Diego. U-1 HomeStreet Bank driver Jimmy Shane is chasing his third straight national high points championship and a third consecutive Bill Muncey Cup at Bayfair.

Shane, who is an engineer at Jeff Bezos-owned Blue Origin in Seattle, has a slim 300-point lead over driver Andrew Tate in the U-9 Jones Racing boat. J. Michael Kelly, who won Bayfair in 2015, trails Shane by nearly 600 points. The final standings could look dramatically different after the HomeStreet Bank Bill Muncey Cup Final Sunday afternoon.