September 3, 2018—HomeStreet Bank San Diego Bayfair presented by Nissan Titan is back on Mission Bay, September 14-16, with a new barbecue competition and expanded on-water action featuring many of the world’s fastest boats. 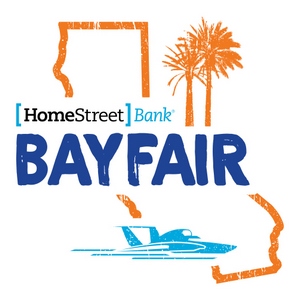 About 70,000 spectators and RVers will celebrate the end of the summer as the three-day festival takes over East Vacation Island, Crown Point and Fiesta Island. Celebrating its 54th year, HomeStreet Bank San Diego Bayfair is one of California’s largest on-water festivals.

“Fans are going to enjoy some of the best barbecue in the country with the addition of America’s Finest BBQ State Championship on Saturday (September 15) during Bayfair,” said Bob Davies, race director for HomeStreet Bank San Diego Bayfair. “At the same time fans will enjoy exciting boat racing at the best racecourse in the country.”

Bayfair features three days of nonstop boat racing, a kids’ zone and beer gardens to enjoy the festivities on Mission Bay. More than 700 RVs will take over Mission Bay Park, a rare opportunity to stay overnight in the park.

Wrapping up its season in San Diego, H1 Unlimited hydroplanes that draws fans from around the world to the shores of Mission Bay. Last year’s Bill Muncey Cup champion Andrew Tate is looking to defend his crown. Tate is coming off victories in Seattle and the Gold Cup in Detroit. Looking to stop the momentum is Miss HomeStreet driver Jimmy Shane, who has won the past three national high points championships. Shane, a three-time Bill Muncey Cup champion, is a fan favorite in San Diego.

Rounding out the on-water entertainment are several classes of amateur racing from the American Power Boat Association. The grass-roots racers will compete off East Vacation Island.

Adding to the fun is the America’s Finest BBQ State Championship on Saturday, September 15. The barbecue competition will feature more than 40 teams firing up barbecues for the best pork, beef brisket, chicken and pulled pork. The competition is sanctioned by the Kansas City BBQ Society.

Barbecue legend Moe Cason will be grilling on Crown Point. Cason, a Navy veteran from Des Moines, Iowa, runs the award-winning Ponderosa Barbecue in Iowa and starred in the TV series BBQ Pitmasters.

Tickets to America’s Finest BBQ State Championship are $10; free for Bayfair fans with a 3-day Super Pass. Meat samples are available for purchase. The barbecue competition will have a beer garden and music with all proceeds going to the San Diego Police Museum.

“Barbecue is very serious business for the competitors,” said Ed LaValle, who is organizing America’s Finest BBQ competition. “We want to create a premier Southern California competition event and we think Crown Point is a great venue.”

Other activities at Bayfair include beer gardens, a large vendor area open to the public on East Vacation Island and activities for the kids. San Diego Bayfair also offers RV spaces to rent on Mission Bay, one of the few opportunities to stay overnight in Mission Bay Park. RV Packages include four nights and five days, plus tickets to the event.

Testing and qualifying with limited racing taking place on Friday, September 14. Heat races and championship races are on Saturday and Sunday. The Bill Muncey Cup for H1 Unlimited is on Sunday afternoon, September 16.

Single-day tickets start at $25 and a three-day Super Pass is available for $45. Children under age 12 are free. 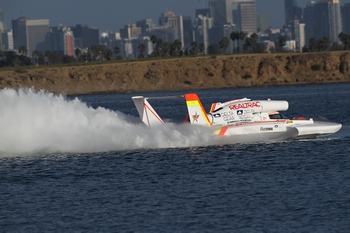 Tate in the Realtrac/Delta gear saved his best for the last race of the season by jumping out to an early lead and holding off a hard-charging J. Michael Kelly in the Graham Trucking boat. Kelly nearly passed Tate but by Lap 4 Tate pulled ahead for good. Kelly finished second and Shane took third in the final.

“The Bill Muncey Cup is definitely a prestigious award that I’m very proud to have my name on with the U-9 team,” said Tate, who won his third race of the season that wrapped in San Diego.

During Sunday’s heat races both Shane and Tate were victors. In fact, every heat during the weekend was won by either Shane or Tate.

Shane was doing double duty this weekend on Mission Bay and captured the final in the piston-powered Grand Prix World Supercharged Hydroplane race.

It was another year of solid attendance for HomeStreet Bank San Diego Bayfair, which is traditionally the last stop for many boat racing tours.

“HomeStreet Bank has been an incredible partner for San Diego Bayfair,” said Bob Davies, race director. “We thank HomeStreet’s CEO Mark Mason and his great team for their support.”