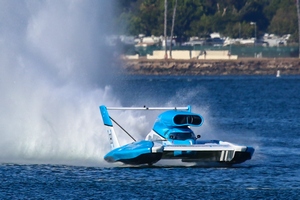 Considered among the fastest boats in the world, H1 Unlimited will crown its national champion on the saltwater of Mission Bay.

The fully enclosed boats run up to 200 mph in the straightaways and drivers are subjected to similar forces of a fighter pilot in turns. The Unlimited hydroplanes pit on Ski Beach.

Powered by supercharged, big-block engines, these boats are a smaller version of an Unlimited hydroplane. The hydroplanes weigh about 3,000 pounds, approximately half the weight of their bigger and faster sibling. Gearheads will love the rumble as these boats light up the 1.5-mile Bill Muncey course.

RPM Racing Enterprises coordinates all of the American Power Boat Association race classes that will be competing on Mission Bay Friday-Sunday. Teams will be competing for crucial points in the quest for an APBA national championship.

Teams compete in front of East Vacation Island/Ski Beach with some practice sessions expected in front of Fiesta Island. The classes competing at Bayfair will be announced in early September. The various classes will pit on Ski Beach.